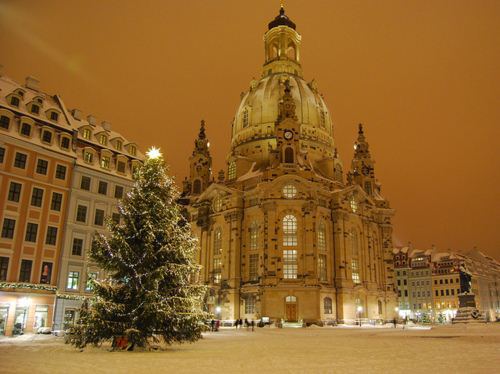 She scurried across the square, keeping her head down to arm herself from the cold.  It had finally stopped snowing but the winter chill cut through her clothes, making her shiver.  She thought back on her day; a day filled with mistakes and disappointments. A fight with her mother over some inconsequential comment that had already been forgotten.  A sighting of an ex with his new girlfriend.  A stern email from her boss over a mistake by someone else’s hand.  When it rains, it sure does pour.

A quick wind came across the square, making her gasp.  She hurried along, anxious to get home and mull over the day’s happenings.  She noticed the Christmas tree and stopped.  It must have been put up that day.  She smiled for the first time.  Christmas always brought the warmth back to her city.  People were nicer and, even though today was filled with bad moments, she knew this particular time of the year would turn that around.  It was just a matter of when.

At that moment, she decided she would call her mother as soon as she got home to apologize.  She would be happy that her ex was dating someone new and felt she would meet someone as well when the moment was right.  She would no longer be upset by her boss’s harsh words, knowing she could have spoken up at any time.  She could turn this day around.  She could make everything right on her own.

She turned around abruptly to finish the walk back to her home only to crash into another person admiring the newly placed Christmas tree.  Books and papers fluttered to the ground and she immediately crouched down to pick up the stranger’s belongings, apologizing along the way.  He crouched down, only to stop her hands. She looked up at his smiling face as he told her to stop.  She blushed, embarrassed, and began to stand.  He gathered his belongings and stood up, and she noticed his eyes for the first time.  They were blue, as deep as the ocean.  She tried to think of something to say but her mind drew a complete blank.  He smiled once again, saving her from herself and made his introduction.

She smiled, marveling at the turn of events as they made their way across the square, side by side.

9 Comments on “A Winter’s Night Encounter”

This site uses Akismet to reduce spam. Learn how your comment data is processed.